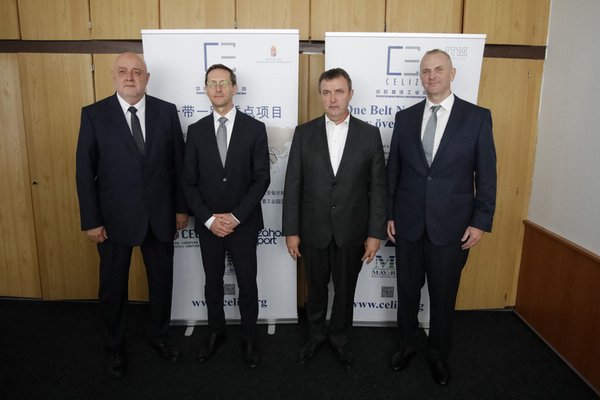 Within the framework of the CELIZ (Central European Logistics and Industrial Zone) program, a strategically significant, innovative logistics, railway and freight hub will be established in Záhony - it was revealed during the visit to Záhony by the Minister of Finance Mihály Varga and the Minister of Innovation and Technology László Palkovics. During the visit, the participants visited the planned locations of the investments in the Záhony transhipment area.

Záhony and its region will be the scene of unusual, long-awaited developments in the next period. In the vicinity of only one city mentioned as a border crossing in the public consciousness, a significant railway investment is being launched, which is also outstanding in Europe.

On June 23, 2020, a consortium called Záhony Logistics and Industrial Zone (CELIZ) was formed under the leadership of MÁV-REC Railway Engineering Corporation LTD whose other member is Záhony-Port LTD and the chinese CECZ Central European Ltd.

The aim of the established consortium is to prepare for the construction of the Záhony Railway Transhipment Area and the Kemecse Industrial Zone through the “One Belt, One Road” initiative supported by the Chinese state, engaging in the development of economic and trade routes to the west. This initiative also provides a framework for the promotion of the CELIZ project, which aims to modernize the railway infrastructure between the two countries in the Záhony region of eastern Hungary. CELIZ is supported by both the Hungarian and Chinese governments, and has been added to the list of “Priority Cooperation Projects” by the One Belt, One Road Promotion Center of the China National Development Committee, thus supporting the promotion of investment.

The other purpose of the visit and site visit, which took place on 2 July, is to start finalizing the presented Hungarian rail freight strategy and to take the initial steps to make the region a freight, logistics and distribution center in Central Europe. The importance of developing rail crisis mobility was emphasized in the post-event discussion. The pandemic situation also highlighted the national strategic interest in procuring proprietary and modern rail freight vehicles and their immediate use in crisis situations.

The event was attended by the government, László Palkovics, on behalf of the Ministry of Innovation and Technology.

"The development in Záhony is the most significant railway investment of the coming years, which will raise the Hungarian railway freight transport to a prominent place, making Hungary a decisive player on the European freight transport map," the Minister of Innovation and Technology emphasized.

Government support for the CELIZ project is significant, not only strategically but also financially. According to their plans, the area could become a freight, logistics and distribution center in Central Europe.