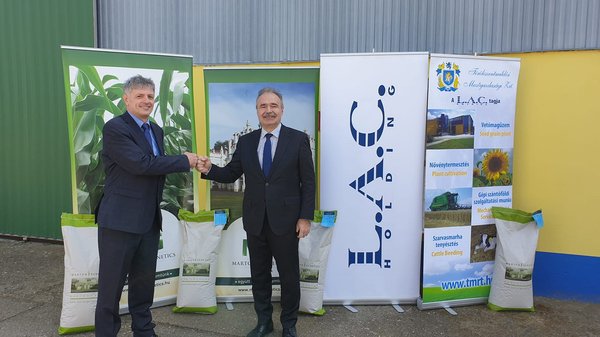 Minister of Agriculture, István Nagy among others, was present at the event on Friday afternoon.

Four trucks, corn seeds for about four thousand hectares set off from Törökszentmiklós, on a journey of nearly five thousand kilometers to Kazakhstan. Abdrasov Zsanibek, Ambassador Extraordinary and Plenipotentiary of the Republic of Kazakhstan, was also present at the event.

The treasure of the Marton Genetics group of companies in Martonvásár, a significant amount of hybrid corn, the treasure of the land of Törökszentmiklós Szenttamási Vetőmagüzem - TM LTD., may soon turn to the territory of the Central Asian country.

There is immeasurable territory and wealth all over Asia. „Hungary is an open country, we cannot leave the opportunities to the east and beyond untapped” – said the Minister of Agriculture, who also spoke about the near future.

Speaking at the event, András Sándorfy, the managing director of two key members of the Marton Genetics group of companies, Elitmag LTD. and Bázismag LTD., said that he would strengthen Hungary’s position in export markets and seed self-sufficiency.

The group will soon open a new warehouse in Almaty, the largest city in Kazakhstan, with a population of one and a half million, and will distribute Hungarian seeds to its eastern partners.

Péter Miskucza, the agricultural director of Törökszentmiklósi Mezőgazdasági LTD., has already said that their company grows crops on four thousand hectares. One-third of this area deals with seeds, with the most significant research on about a thousand hectares being hybrid corn production.

Speakers emphasized that Hungarian corn seed is like the Hungarian man: he is born in bumpy ground, then he struggles, he wants to live, and he does not want to be pressed by others. They are for life!