Visit of the new Ambassador of Kazakhstan to Karcag 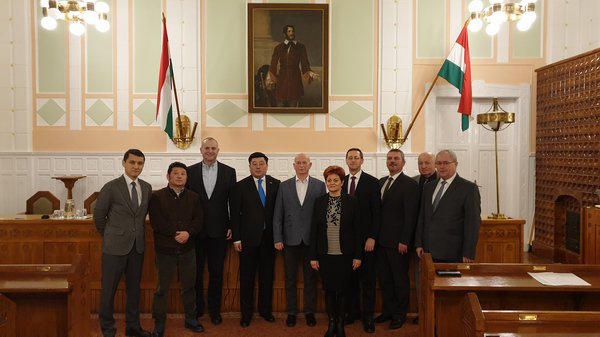 Mr László Horváth Honorary Consul of the Republic of Kazakhstan invited the new Ambassador of Kazakhstan to Hungary Mr Abdarasov Zhanibek who has this title since December to visit the consulate office of the Town Hall in Karcag. Mr Mihály Varga Minister of Finance and Deputy Prime Minister, Mr Sándor Fazekas member of the Parliamentary Committee of Agriculture and Honorary President of Kipcsak Union, Mr Sándor Kovács member of Parliament and President of Kipcsak Union, Mr László Dobos Mayor of Karcag and Mrs Szilvia Sári Kovács Deputy Mayor attended the event. On the spot Mr Horváth introduced the office and said he was deeply concerned with the Kazakh-Hungarian relations.  He hopes that cooperation with the new Ambassador will be fruitful. Afterwards the participants visited the Morgó Csárda which already functions as a monument, where the Honorary Consul invited the guests to eat a real traditional lamb stew from Karcag. The Ambassador ate the famous dish for the first time but not for the last time. He liked it very much.

For Mr Horváth Honorary Consul, besides the Kazakh-Hungarian economic-business relations it has always been important to cultivate and strengthen cultural relations too. He paid special attention to the commemoration and maintenance of traditions. During the event the Honorary Consul and the Ambassador also talked about the Kipchak tradition celebration in Karcag.