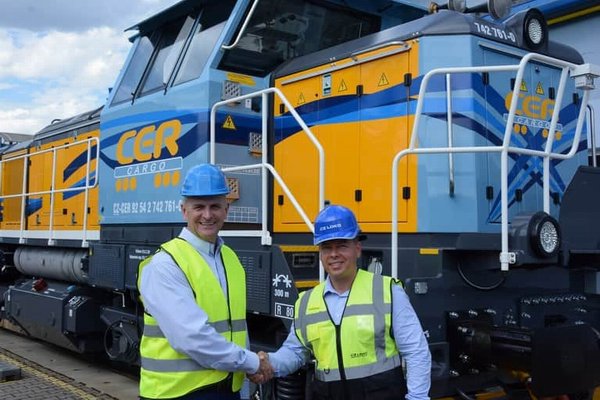 CER Cargo Holding expanded its fleet with an EffiShunter 1000-M locomotive. The handover ceremony took place on 28 July, 2020 at the CZ Loko plant in Jihlava in which both companies high ranking officials participated. The second locomotive ordered with the first one will be handed over this year in August.

Ensuring reliable and well-functioning diesel capacity in the Hungarian, Slovak and Czech railway markets is of strategic importance. In each of the three countries rail freight transport companies with sufficient diesel capacity have an advantage over other companies due to the specialties of the railway market and the track network. This is why CER group decided to strengthen its diesel fleet with the reliable CZ Loko locomotives.

In the ceremony a sales contract was signed by the highest ranking officials of both companies to purchase two more locomotives for which the Széchenyi Funds secures the financial source. The type of the locomotives to be purchased are the 356 006-6 Effiliner3000 electric locomotive and the 742 762-8 Effishunter1000m diesel locomotive.

Warning: Unknown: Failed to write session data (files). Please verify that the current setting of session.save_path is correct () in Unknown on line 0